Top 10 Things To Know About Living in Sweden

A few weeks ago, there was a great This American Life episode called Americans in Paris. In Act 1, Ira Glass followed David Sedaris around his life as an ex-pat. It got me thinking about typical reputations of the French to American tourists (rude, mean, snobby) vs. Swedes (polite, friendly) – but then there’s the reality of what it’s like to actually try to move to one of those countries. I’ve never spent more than five days in Paris, but from what I’ve heard, once you get past the initial snobbery of the French, they’re fairly welcoming, whereas in Sweden, while everybody is polite, you might live here for years and years without actually making it past that initial friendly facade. 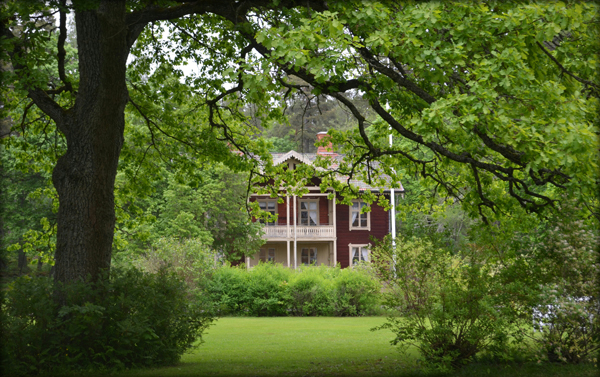 Here’s a hilarious tumblr I just discovered called An Immigrant in Sweden – from all accounts (mine and other non-Swedes who have been here longer than I have) it’s pretty much right on. If you have any curiosity about life in Sweden, it perfectly captures it.

In summary, here’s my own Top 10 Things to know about Living In Sweden:

And that’s what it’s like to live in Sweden! 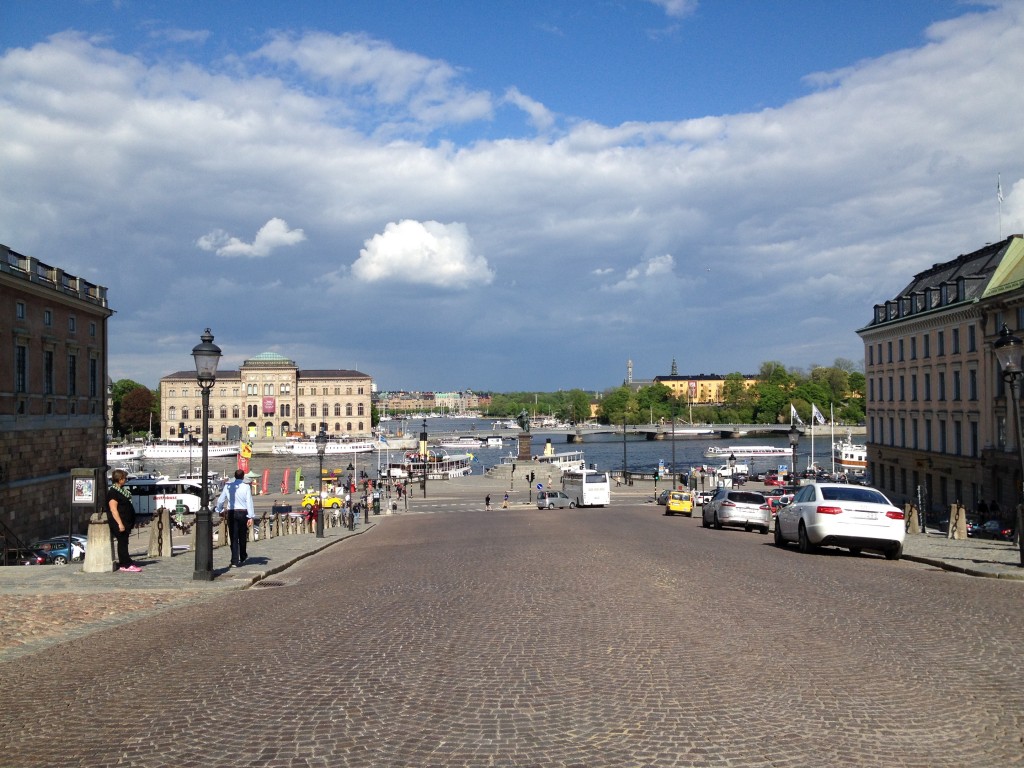 Top 10 Things to Know About Swedish

This one is for my friends (Zane!) and family (parents!) coming to visit, plus that nice couple from Chicago I met on the Flygbussarna back from the airport: 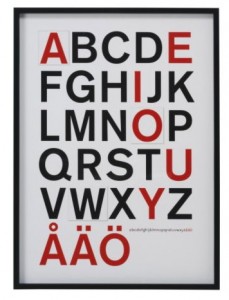 Top 5 words to know in Swedish: 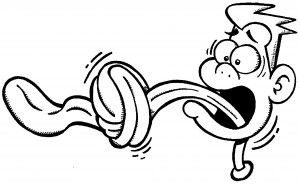 To hear some Swedish words spoken by real Swedes, here are some examples:

And for some clothing words I especially tried to learn:

And when in doubt, make it even more melodic, just like the Swedish Chef:

As an extra bonus, here are the (mac) keyboard shortcuts for those Swedish vowels! 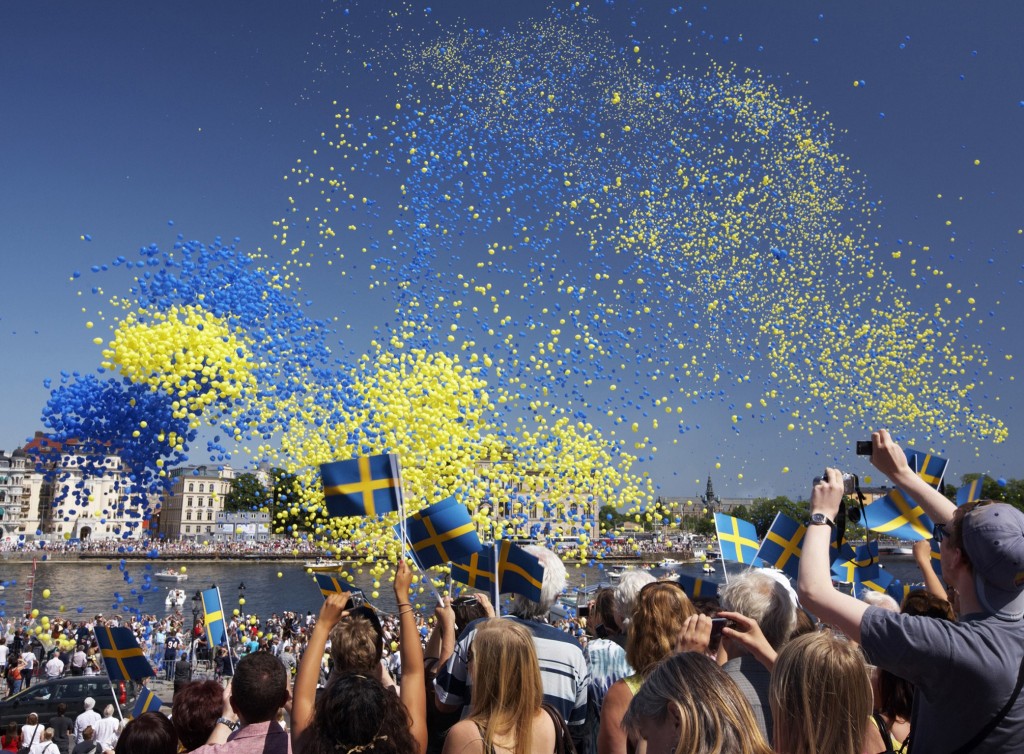 June 6th is Sweden’s National Day. Technically it commemorates two occasions: on that date in 1523, Gustav Vasa (infamous Swedish hero) was elected king, and on the same date in 1809, the country adopted a new constitution. But it wasn’t a national holiday until 2005, and as it turns out, Swedes are just as confused as to what to do with it as anybody else is.

Mostly its just a chance to enjoy a day off work, hope that the sun is shining (good luck with that), and try and find some blue flowers (the royal palace seems to stick with yellow and purple as the closest bet: 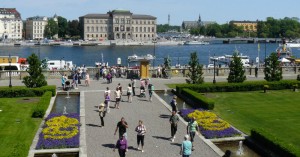 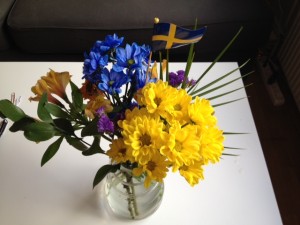 Today is graduation day in Sweden. This is what it looks like: 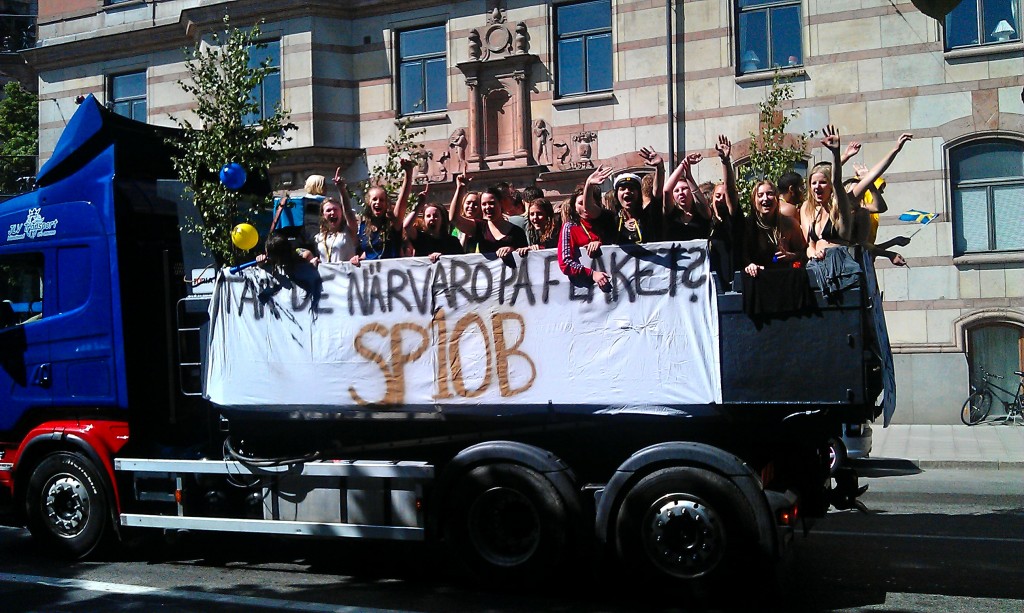 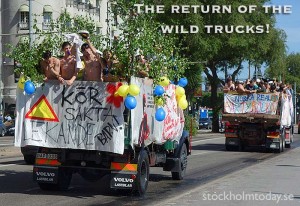 That right. Trucks full of half naked screaming Swedish teenagers jumping up and down, blaring dance music, screeching whistles, and spraying each other with cans of beer. ALL OVER THE CITY. Many of the trucks I’ve seen were leaking massive rivers of beer behind them. It smells kind of like St. Patrick’s Day in the US.

Many of them also wear these hats (everybody loves a uniform!): 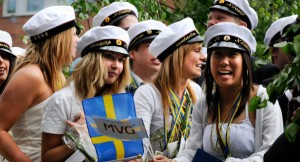 This does not make them recently graduated sailors. This is the traditional graduation hat! The Swedish version of a mortarboard, kindof.

Thanks to a little trip to wikipedia, here is a fantastic (and historical) comparison of the variety of Scandinavian “student caps”: 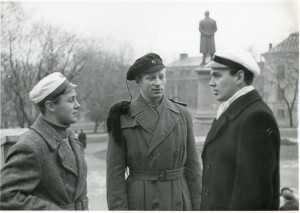 I find it hard for Americans to adjust to the Swedish use of this hat. I guess that’s just the power of uniforms, that we just instinctively want to shout “O Captain, My Captain!” when confronted with a white brimmed cap, even worn by drunk teenagers.

One interesting thing about the role of students I’ve noticed here in Sweden is that once you’re finished with gymnasiet (that’s high school here, not gym class), you’re pretty much considered an adult. Young Swedes can’t wrap their head around the idea of parents driving them to college and helping them set up their dorm rooms, they think that’s crazy.  Maybe this is because college is (mostly) free in Sweden, but by the time you get to university, it’s considered a job, whereas in America it seems like more and more that college is just considered an extended childhood.

For Tuxedos, Blue is the New Black 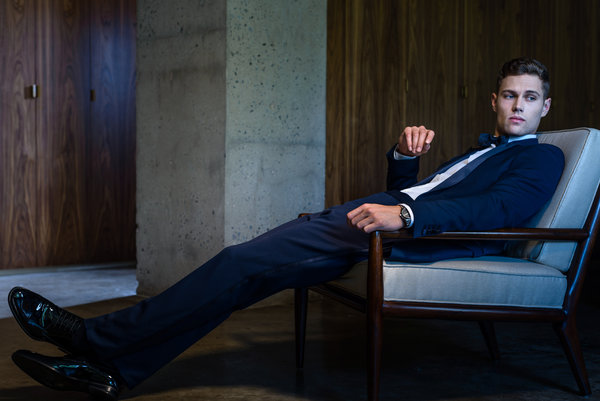 Personally, I found the NYTime’s article “For Tuxedos, Blue is the New Black” to be missing its own point. It did mention a little-known fact about the history of the tuxedo, that of American James Brown Potter dining with the Prince of Wales in 1886, (who was busy flirting with Potter’s wife) – but neglected to mention that the Prince had first had this tail-less dinner jacket made by his tailor Henry Poole & Co much earlier, in 1868: 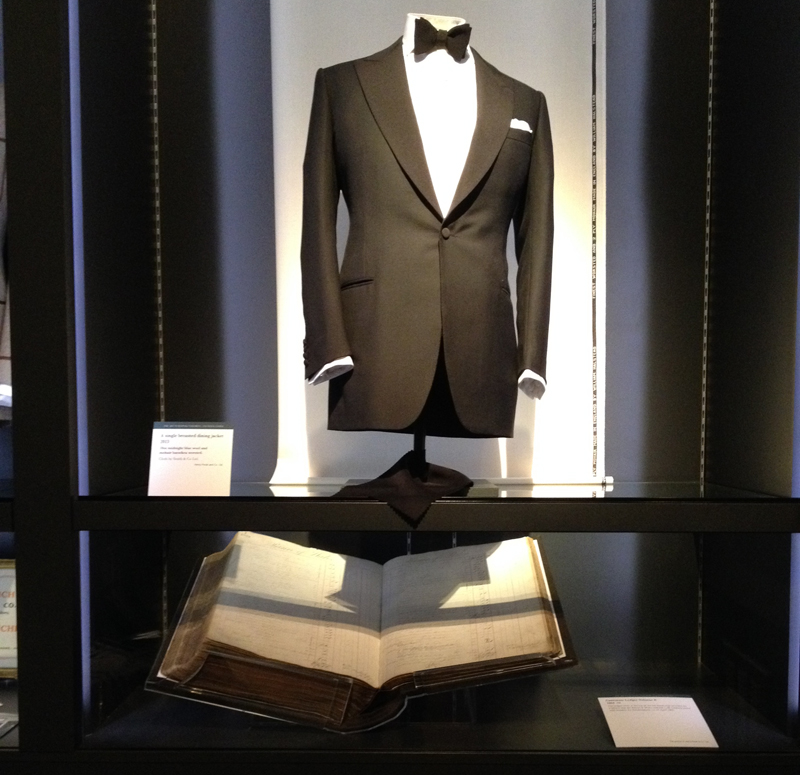 Henry Poole & Co. tuxedo, above the ledger where the tailor first records a tail-less dinner jacket for the Prince of Wales.

One other minor bone to pick, it mentions that tuxedo jackets are called “dinner jackets” by “fancy folks” – which may be true if what the New York Times means is “British people.” Because the term “tuxedo” did develop from the Tuxedo Park Club in New Jersey, it began (and remains) a specifically American term for this garment, which is more traditionally called a dinner jacket in Britain, as well as “le smoking” in France, Sweden, and other continental countries.

Thanks to the Metropolitan Museum’s Costume Gala earlier this month, more articles have been cropping up about men’s formalwear, and I for one am glad of it. Looking at formalwear is the best way to examine the male practice of wearing a “uniform,” for either military or civilian dress, and whether you’re a believer in sticking to the rules or wanting to demolish them, I think the most interesting part is that we have those rules in the first place.

A few recent headlines reinforce Sweden’s reputation for having the safest roads in the world. First, new NYC mayor Bill De Blasio has instituted the Swedish model “Vision Zero” – a year with zero traffic-related deaths, with a target of 2024. 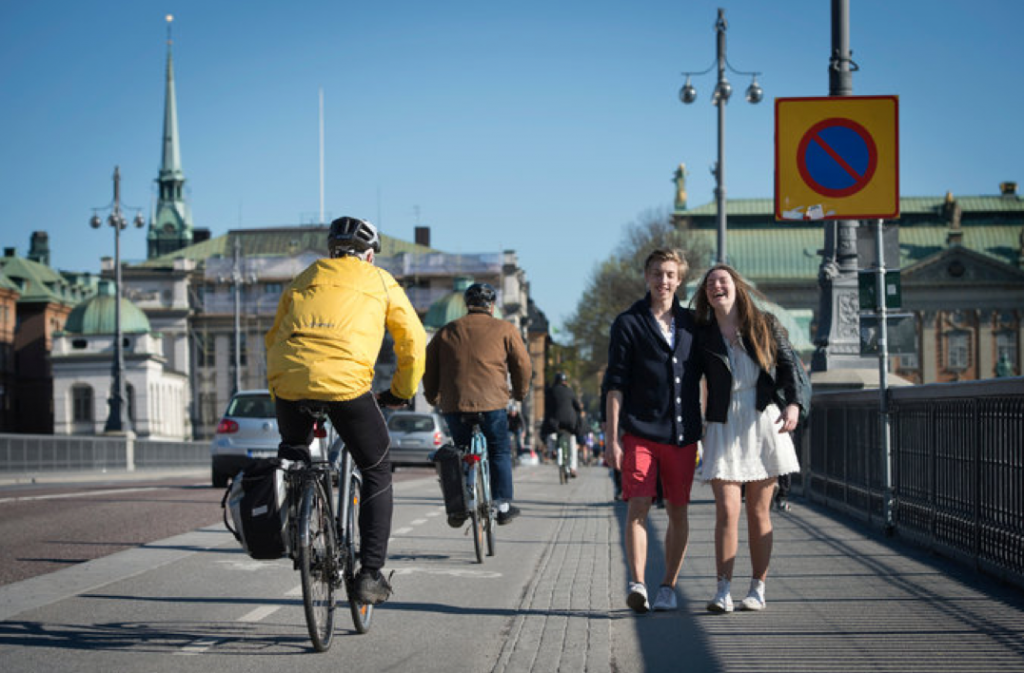 Having spent the last four months in Stockholm (primarily as a pedestrian and user of public transportation), I can tell you that the majority of honking, speeding, and any signs of road rage I have witnessed have all occurred in the last week – when the number of tourists here seems to have multiplied by about 400%.

And here’s more about how that safe Swedish sensibility came about – so much so that being called a “typical Swede” is like saying you’re playing it too safe, being too boring. Compared to the rampant traffic chaos in Manhattan, I think we could use a little of that attitude. One of the most amazing attitudes I find from the Swedish perspective is that it allows for human error. What?? In America, we punish accidents! But in Sweden, they plan for it….and that seems to make a big difference.

One more interesting thing to note – while there are not as many bikes in Stockholm as I saw on my trips to Copenhagen and Amsterdam, there are a LOT more bike helmets. 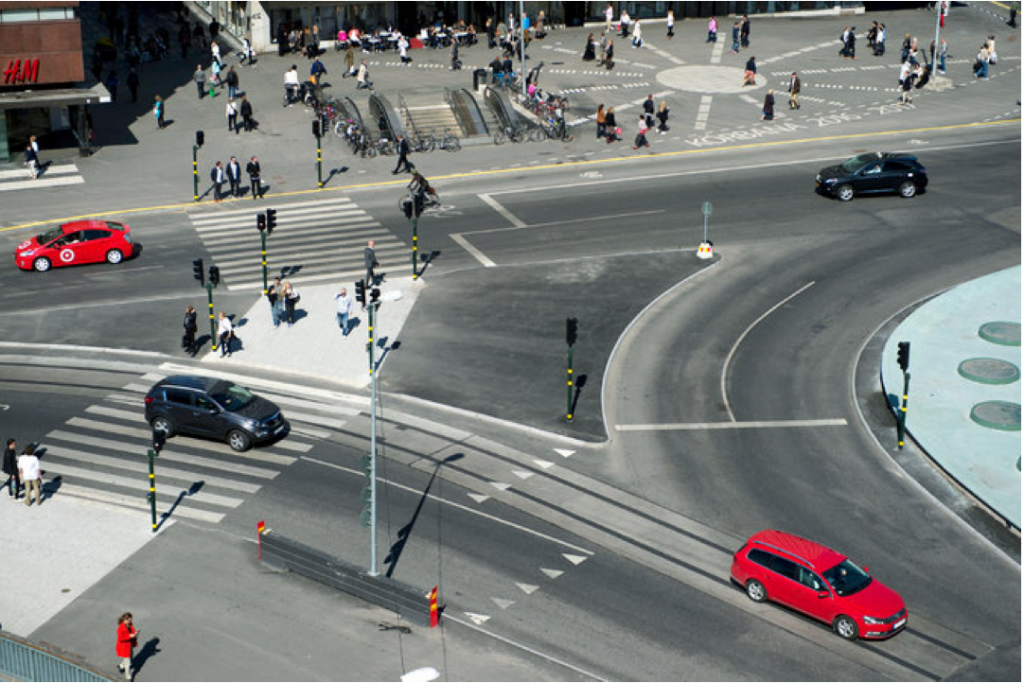 Another example of students wearing ties in protest – this time at the San Francisco Catholic school Sacred Heart Cathedral Preparatory, in support of a classmate who had been banned from the yearbook for wearing a tuxedo. 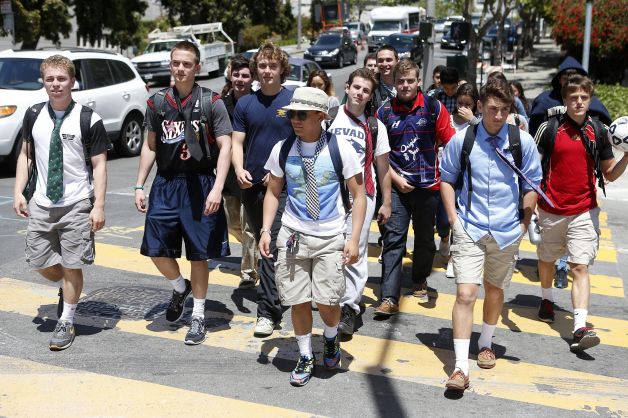 Jessica Urbina wore a tuxedo for her senior photo, violating the Archdiocese of San Francisco’s policy that female students wear dresses in their yearbook photos. 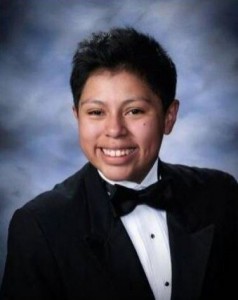 Since the protest, the school has since apologized to the student, and they say they will re-evaluate the policy. They make a point in the apology to be more open towards gay and lesbian students, which is excellent.

It also may be a good time to evaluate why we have such decisive rules towards gendered dressing in the first place, regardless of sexual orientation. As ACLU spokeswoman Rebecca Farmer tweeted, “students shouldn’t be forced to conform to outdated gender norms.”

The Power of The Suit 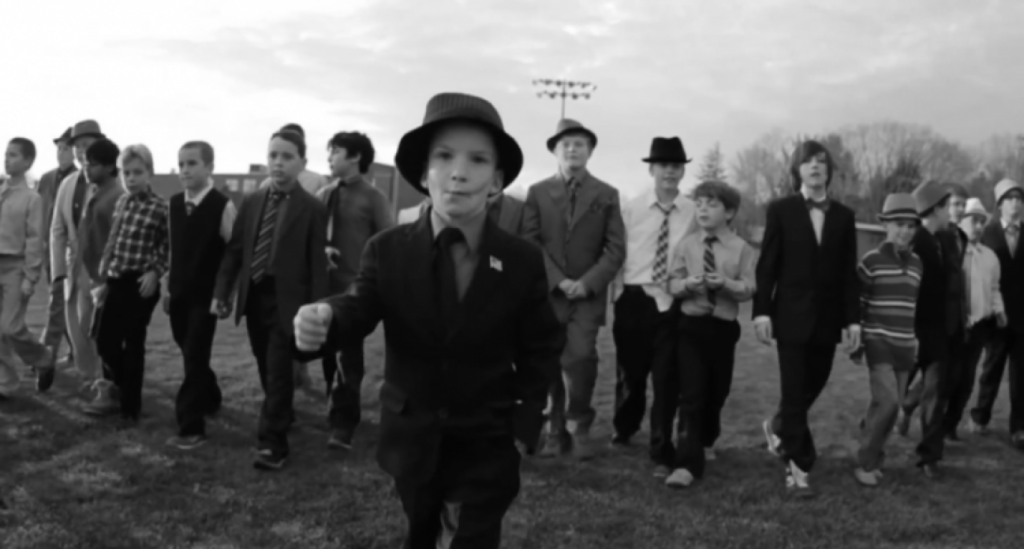 This isn’t a new story, but when it resurfaced in front of me, I was struck again by the need of men (and boys, here) to participate in the dressing code of urban camouflage. More than women (and girls,) who – within the context of current fashion trends – are more likely to be taught to stand out, be creative, unique, individual, have their own style, it is more likely for men to follow rules and wear just what everyone else is wearing (here, as a show of support and acceptance.) Like in the military, where there are guidebooks written for what you should be wearing at every possible occasion so as to never have to second-guess yourself and show up in something inappropriate. Hence, the business uniform of the suit.

It’s a very sweet story about anti-bullying, and worth the watch:

Do we think this attitude towards dressing like your friends is more gender-neutral in children, and does it get more pronounced as people get older? Is it a learned behavior or an innate one? Was it always this way, or did it develop at some point in history? I am certainly no child psychologist, but it would be interesting to see if anyone has done a study about this.

Sweden is rightfully proud about how great it is to raise children here. Of course, compared to the US, most countries are ahead of things. (Shame on you, America!) 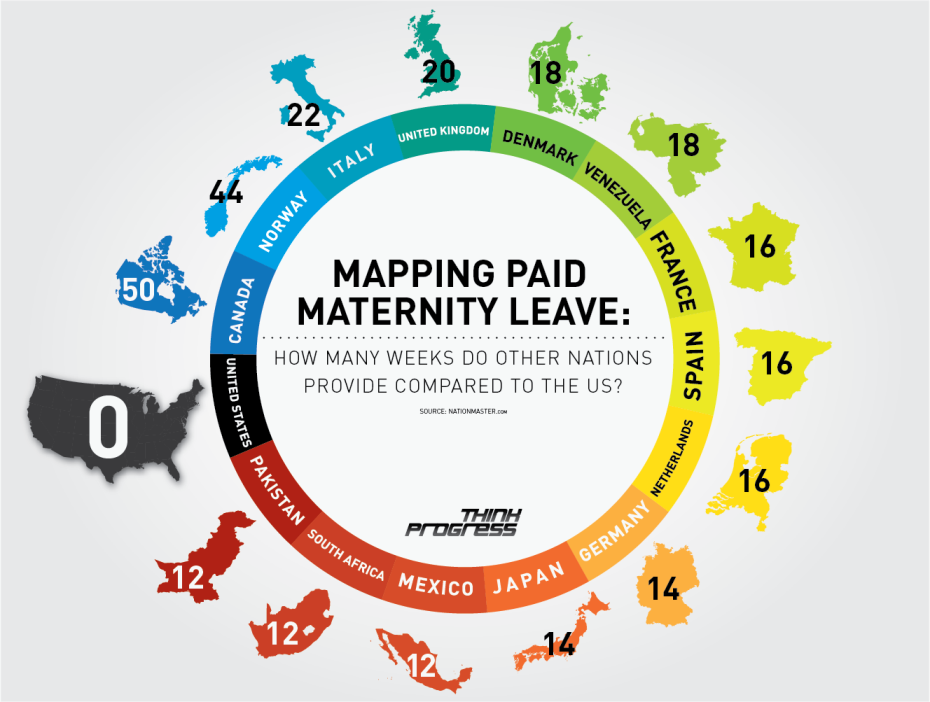 Sweden, meanwhile, is embarrassed that they’re only in third place for the “world’s best place to be a mom” – you’ll notice that this article specifically calls out the US and Somalia as places that need to get with the program. Now that’s shameful, America. (And just wait until we talk about paternity leave!)

In addition to the usual commercialized sentimentality of today’s holiday, here is an excellent piece from one of my favorite writers, Anne Lamott – a 2010 article in Salon magazine called “Why I Hate Mother’s Day.” She reminds us that it isn’t only moms who do the mothering, that not everybody has a very motherly mother (I’m lucky that I have a great mom!), and that not all women want to or are able to have children, and that in no way diminishes their value as people, or as women.

I love how this middle-class kid in Holland is wearing the same fashionable petticoat breeches with crazy ribbon trim that kings were wearing across Europe – it really shows the international power of fashion! 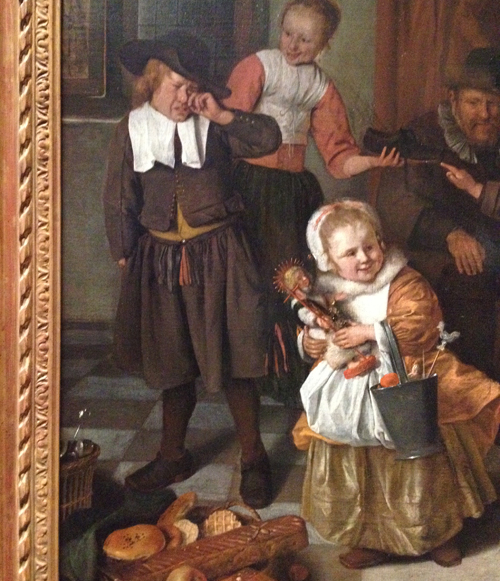 These breeches had legs that were so wide that they were called “petticoat breeches” because they looked like skirts, and they featured ribbon loops across the front closures, and around the bottoms or on the sides – they could use over 200 yards of ribbons for one pair of pants! The famous English diarist Samuel Pepys mentions them in April 1661, when he mentions that a friend “told of his mistake the other day to put both his legs through one of his Knees of his breeches, and so went all day.” 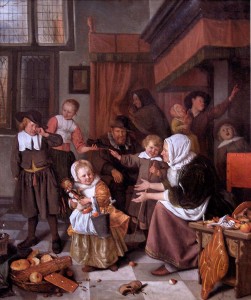 And here are some of the real things, from the Livrustkammaren collection that I’m working with here in Stockholm:

A wonderful closeup of all those ribbons! 1650, Livrustkammaren.

And a great example of somebody actually wearing them… 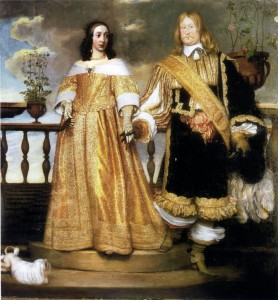